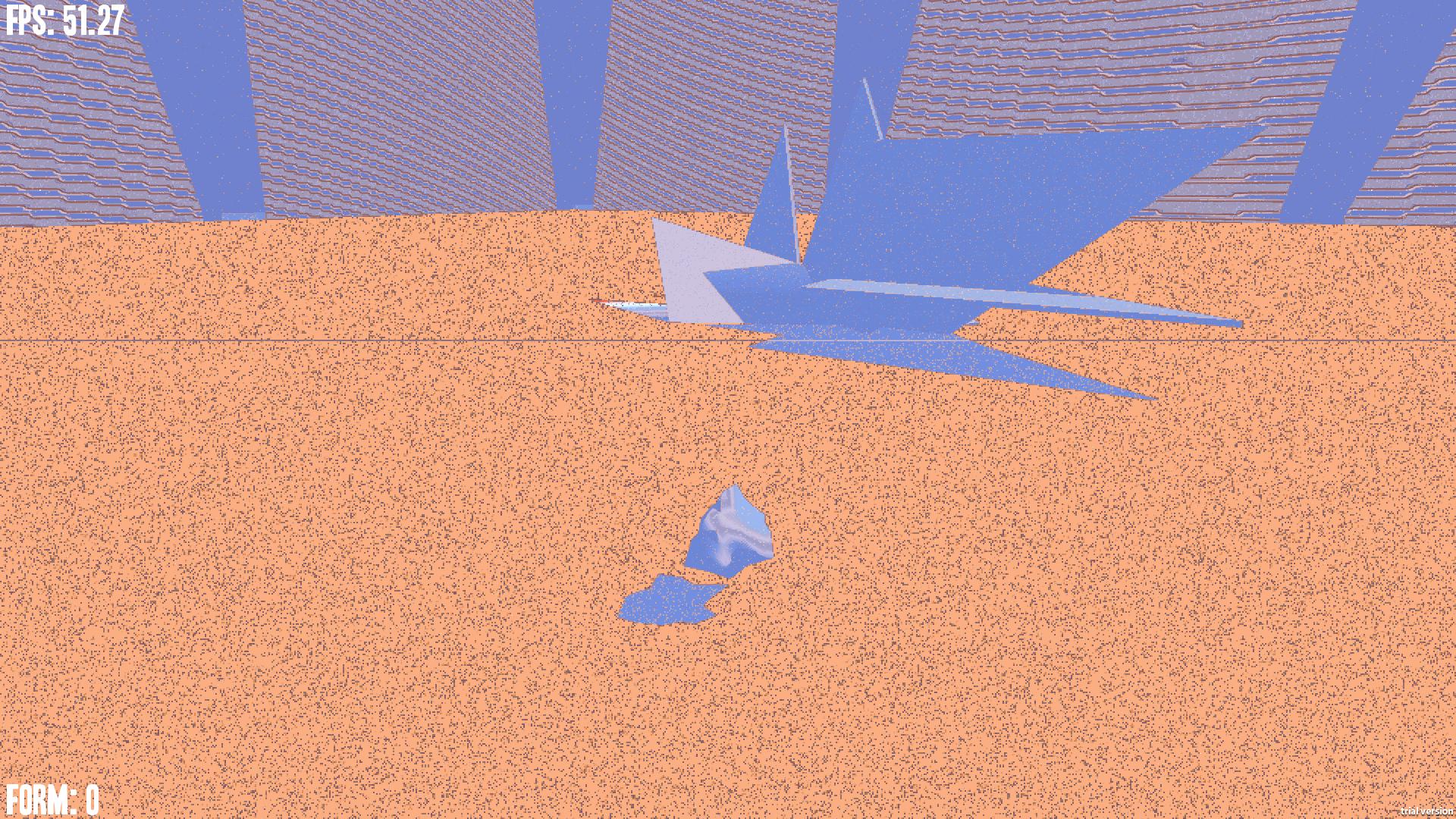 Why play it? The Yellow Wallpaper is an attempt to adapt the classic short story by Charlotte Perkins Gilman into a videogame narrative. Being breft and lacking context, the game doesn't quite stand on its own without a reading of the story beforehand. Where it particularly succeeds, however, is in utlizing the first-person perspective and 3D spaces to portray Jane's (the main character) dwindling mentality.

In the story, Jane grows an obsession with the yellow wallpaper of the room her husband (John) has locked her in. You actually see the figures within the wallpaper that she imagines within the story. They fidget between the panels, playing hide-and-seek, teasing you to chase them like a flock of grounded birds that fly off as soon as you near. It's a tantalising activity, and the frustration that can come from its pursuit has you feel some of Jane's desperation.

You also move between physical space and Jane's mental space constantly, back and forth. When you're not stuck inside the room, you transition to the dark areas around it, looking in through the wallpaper that now takes the form of prison bars. Here, Jane occupies the space that the people in the wallpaper do, linking her physical and mental form to them, becoming them, just as she perceives herself as doing in the story and that leads to her eventual insanity.

Why play it? Dutch artist Johannes Vermeer's 17th century oil-on-canvas painting The Milkmaid is turned into an enormous climbing frame for us to investigate from all angles. Her frozen grip on the pot, the curve of her bosom, the top of her linen cap all become surfaces to reach and leap from.

The integrity of the original painting's smooth oil paints degrades to raw, swampy textures: muddy darks as shade, and blotchy yellows and blues form her dress. We get too close to this 3D model, up in its face, seeing all imperfections and peering at the hollow spaces inside.

You can even climb into the pot in which she pours milk, hiding inside the structure, almost turning it into a makeshift home rather than an artwork. Like all surfaces and environments in videogames, it becomes a tool for us to find a use for, or an obstacle to traverse - losing its origins as art to be viewed from a distance.

Why play it? FISHBONES has no time for introduction or explanation. You're plunged into a despairing, psychedelic drowning scenario from the start. You writhe, trying to make sense of the space around you, turning your virtual head in every direction, unable to move.

You soon realize a weight tied around your feet is pulling you down and down and down into the dark depths of this stygian ocean. Suggestions of skeletal fish and driving accidents make themselves known at the edges of your vision. What happened to you? Are you dead? Why are you here?

You can close your eyes to escape the ghosts. But you'll have to open them eventually, and when you do things may have changed, for better or for worse...

Why play it? Your goal is to drive the frame rate of the game so low that it crashes. As a ball of jagged texture (like a scrunched up piece of paper) you rapidly decay and must collect jagged geometric shapes known as "Form" so you can chew them up and desposit them. They morph into graphic intensive spherical particle fields with a body at the center that you'll become once your current body has withered. If you have no other bodies left to inhabit when dying, you fail.

Even if you don't enjoy the constant pursuit of Form and staying alive, the intense flickering of colors, flashes, and grainy screen filters is worth experiencing. Combined with the appropriately gnawing, rumbling, and gnarling sounds it creates a macabre aesthetic that truly captures the idea of a powerful technological monster dying with you inside of it.

even the stars (Pol Clarissou) 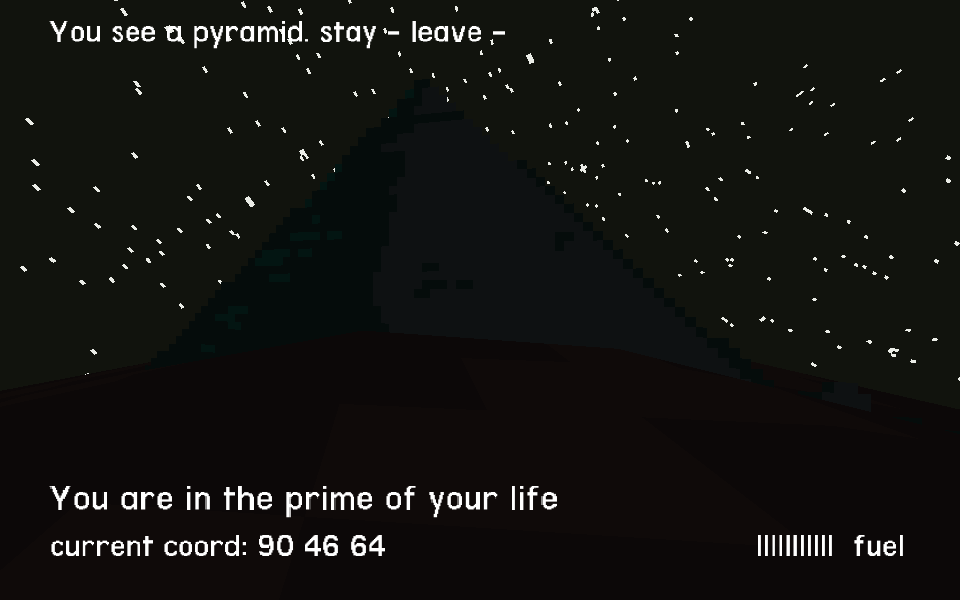 Why play it? This has shades of the aimless, serendiptious space exploration of Noctis IV CE. You have no purpose other than to occupy your time spent alone in space.

By typing commands, you warp between the planets, disembarking when you see a structure -- a pyramid, a space station, a forest -- staying as long as you wish, perhaps refuelling if you're able to.

You create your own stories from the little information you're given of each planet. Maybe you'll elaborate on them later when describing your journey inside the game to friends later on, passing on the co-ordinates that you jotted down so they can see what you did.

Perhaps the most interesting aspect of the game is how you age over time. You'll start off young, and if you play for long enough, you'll reach the prime of your life and, eventually, your old age. It offers a sense that you may be wasting your time, that you have a mortality to fill up with exciting sights, forever being disappointed that your vagabond lifestyle has neither home nor reason. 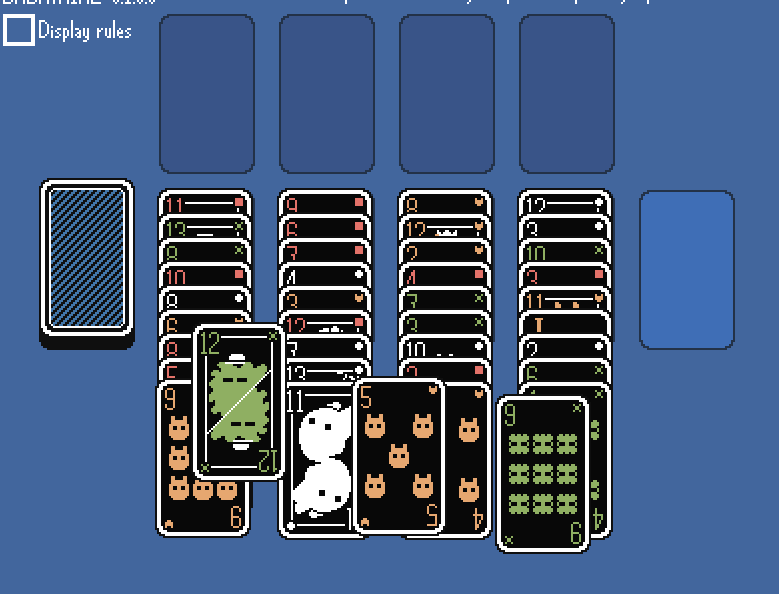 "A solitaire inspired heavily by Zachtronics' Cluj solitaire, with Baba Is You character art on the cards!" - Author's description Play here (Browser)