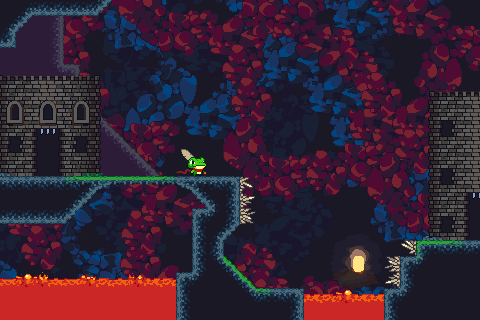 "FROG SORD is a fast paced 2D action-platformer where landing jumps is just as important as landing blows with your sord.

Frog lives on the outskirt of a small town where he is picked on for being different. Nobody likes Frog because Frog is a frog.

One day Frog overhears an old woman’s story about a frog being turned into a handsome prince by the kiss of a princess. Seeking acceptance and a better life, Frog seeks out an old sord deep in the forest. He’s determined to rescue a princess and earn a kiss." - Author's description

Note: Frog Sord is no longer being developed after the team at MECH6 broke up and an IP issue means that none of them can continue working on the game. The early alpha build that you can download below was released by Frog Sord designer and programmer Zack Bell here.

Zack is considering starting work on a new game that carries the spirit, and a similar design to, Frog Sord. He is also toying with other game ideas and will be developing them under new studio name CouchDevs.