Hello! Yes, this is new. Pocket Dimension is going to be a highlight reel or a playlist (if you prefer) of some of the games we've played and picked over the past week.

Of course, every game we feature on Warp Door is one that we think is worth playing. However, as we post quite a few every day and you probably miss some of them, Pocket Dimension is a way to bring a few of our favorites to the fore before the new week recycles our memories and they get lost to the vestiges of time.

This is the first edition of that. This is it. Yep.

Things to play are below... 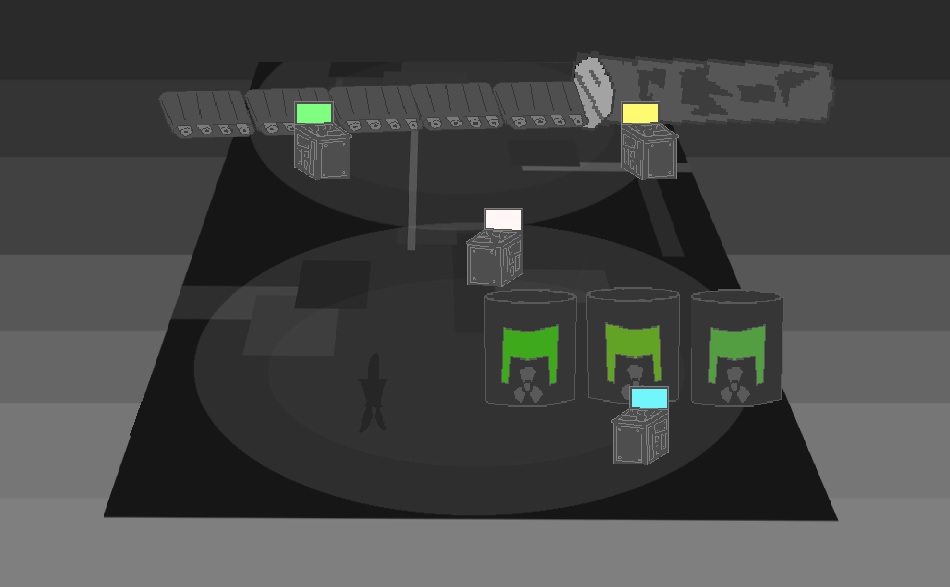 Why play it? Firing weapons in games is usually just a case of pulling a trigger or pressing a button. Here, it's a slow process fraught with viscousness and uncertainty. You're required to operate several terminals without instructions. Stubborn levers can be pulled and buttons can be pressed, sometimes green lights happen.

Just as you're starting to get the hang of it, the machines start to rumble and rattle as sirens go off warning of a meltdown. Activities become intense, you fumble, and will likely fail to fire the weapon. The sounds of Weapon 1482 really stand out, providing an unsettling tone, and groans of grey and tired war machines. I also love the sounds of the creature's legs; rapid and blunt like machine gun fire. It makes the simple effort of moving intrinsically satisfying.

Why play it? This is what happens when you let music tear apart a videogame. The initial rise of the lo-fi bass in Black Atlass's song "Castles" conducts the descent of monoliths from the ceiling. They land in a crystalline arena and become full with color immediately on touchdown. One purple pillar drops, slowly, and then...

...huge 3D models collide with each other. Planes, parts of skeletons, cars, spiky mountains; they move through you; drive you off a cliff; turn you into a ghostly dancer. It's like you're behind the curtain of an abstract music video being performed on stage, seeing all of the imperfect parts as they swap places, leaping on and off stage to the music.

The ending lets you walk through the center of the world. You fall to the void below, looking up at the land you were just walking on, now trasparent, just floating in the middle of nowhere. The music fades to silence and you dissipate, dead. 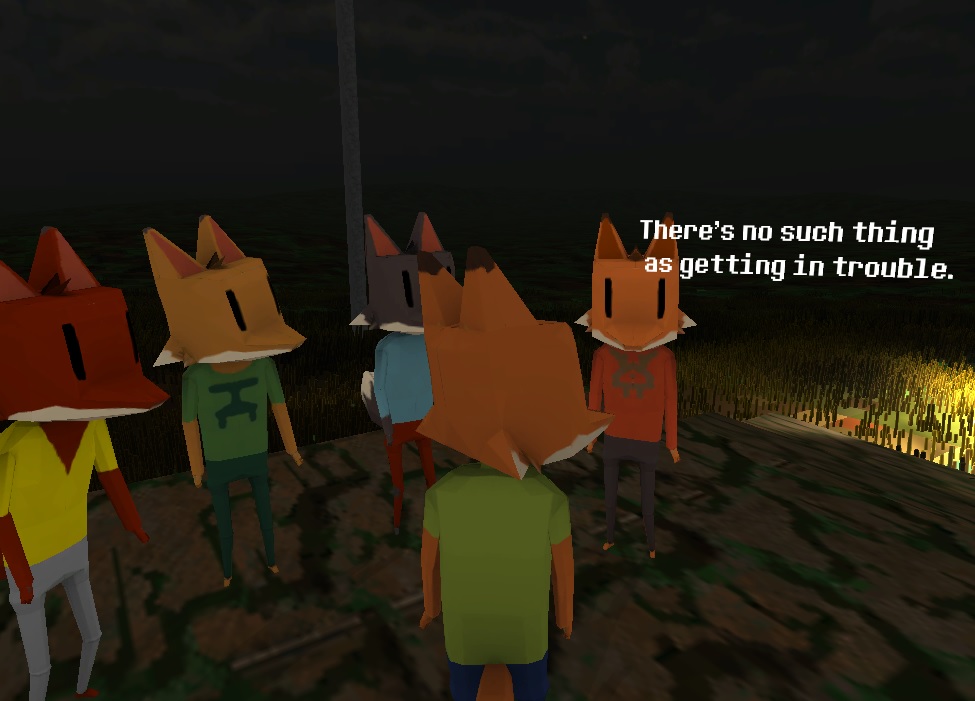 Why play it? Imagine if a videogame was found on an old cassette tape. That cassette has taken some bashes and scuffs during its life, possibly housed a demon once or twice, too.

Leo Burke's 776 - 778 - 780 is a three-part videogame. The first part is as if a short authored game about rascally anthropomorphic foxes talking about an elusive metaphorical disaster, and then heading home across the fields on their speeders. The other two versions of the game -- 778 and 780 -- are played as if corrupted by something, whether it's wear and tear or a warped entity. Sides B and C to the original Side A, if you will.

Why play it? Nuprahtor told me of his Compositions that they are attempts to capture a single, strong idea. As with his other Compositions, this one is short and haunting. The idea could be to portray what it's like to be surrounded by people, some like us and others not, yet we feel alone and terrorized by these hostile bodies. I have no idea.

Your movement is slow, wobbly, and even the turns of your head are incredibly laborious. You breathe slowly, heavily. Your vision is framed by your heavy costume.

The slowness of it all makes you fragile while the text and tones puncture your imagination and let it run wild with thoughts that threaten to send you in a state postured by the others. "Tense" is the best word for it while "terrified" describes my feeling while playing it.

p.s. That's it for this week. I would have included more but I started writing this pretty late and I'm quite tired now. Next week will hopefully be better.